This article is an original work that advances our understanding of equine respiration and breathlessness.
The authors, David J. Mellor * and Ngaio J. Beausoleil, bring an invigorating new look at an old problem.

Horses have superior athletic capabilities due largely to their exceptional cardiorespiratory responses during exercise. This has particular relevance to horses’ potential to experience breathlessness, especially when their athletic performance is reduced by impaired respiratory function.

Breathlessness, incorporating three types of unpleasant experiences, has been noted as of significant animal welfare concern in other mammals. However, the potential for breathlessness to occur in horses that are usually ridden wearing bitted bridles has not yet been evaluated in detail.

This information provides a basis for considering the circumstances in which breathlessness may have significant negative welfare impacts on horses as currently ridden wearing bitted bridles.

Potential beneficial impacts on respiratory function of using bitless bridles are then discussed with emphasis on the underlying mechanisms and their relevance to breathlessness.

It is noted that direct comparisons of cardiorespiratory responses to exercise in horses wearing bitless and bitted bridles are not available and it is recommended that such studies be undertaken.

The aim of this review is to use existing literature on equine cardiorespiratory physiology and athletic performance to evaluate the potential for various types of breathlessness to occur in exercising horses.

In addition, we investigate the influence of management factors such as rein and bit use, and of respiratory pathology on the likelihood and intensity of equine breathlessness occurring during exercise.

In ridden horses, rein use that reduces the jowl angle, sometimes markedly, and conditions that partially obstruct the nasopharynx and/or larynx, impair airflow in the upper respiratory tract and lead to increased flow resistance.

The associated upper airway pressure changes, transmitted to the lower airways, may have pathophysiological sequelae in the alveolae, which, in their turn, may increase airflow resistance in the lower airways and impede respiratory gas exchange.

These and other factors are implicated in the potential for ridden horses to experience three forms of breathlessness—”unpleasant respiratory effort”, “air hunger” and “chest tightness”—which arise when there is a mismatch between a heightened ventilatory drive and the adequacy of the respiratory response.

It is not known to what extent, if at all, such mismatches would occur in strenuously exercising horses unhampered by low jowl angles or by pathophysiological changes at any level of the respiratory tract. However, different combinations of the three types of breathlessness seem much more likely to occur when pathophysiological conditions significantly reduce maximal athletic performance.

Finally, most horses exhibit clear behavioural evidence of aversion to a bit in their mouths, varying from the bit being a mild irritant to very painful. This in itself is a significant animal welfare issue that should be addressed. 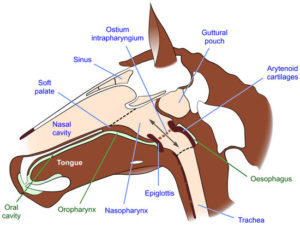 A further major point is a potential for bits to disrupt the maintenance of negative pressure in the oropharynx, which apparently acts to prevent the soft palate from rising and obstructing the nasopharynx.

The untoward respiratory outcomes and poor athletic performance due to this and other obstructions are well established and suggest the potential for affected animals to experience significant intensities of breathlessness.

Bitless bridle use may reduce or eliminate such effects. However, direct comparisons of the cardiorespiratory dynamics and the extent of any respiratory pathophysiology in horses wearing bitted and bitless bridles have not been conducted.

Such studies would be helpful in confirming, or otherwise, the claimed potential benefits of bitless bridle use.

This site uses Akismet to reduce spam. Learn how your comment data is processed.

This website uses cookies to improve your experience while you navigate through the website. Out of these, the cookies that are categorized as necessary are stored on your browser as they are essential for the working of basic functionalities of the website. We also use third-party cookies that help us analyze and understand how you use this website. These cookies will be stored in your browser only with your consent. You also have the option to opt-out of these cookies. But opting out of some of these cookies may affect your browsing experience.
Necessary Always Enabled
Necessary cookies are absolutely essential for the website to function properly. These cookies ensure basic functionalities and security features of the website, anonymously.
Functional
Functional cookies help to perform certain functionalities like sharing the content of the website on social media platforms, collect feedbacks, and other third-party features.
Performance
Performance cookies are used to understand and analyze the key performance indexes of the website which helps in delivering a better user experience for the visitors.
Analytics
Analytical cookies are used to understand how visitors interact with the website. These cookies help provide information on metrics the number of visitors, bounce rate, traffic source, etc.
Advertisement
Advertisement cookies are used to provide visitors with relevant ads and marketing campaigns. These cookies track visitors across websites and collect information to provide customized ads.
Others
Other uncategorized cookies are those that are being analyzed and have not been classified into a category as yet.
SAVE & ACCEPT
Scroll to Top