Sadly, many horses miss out on herd interaction when they’re kept in a space alone. This can negatively affect their mental health and in turn their behavior.

Have you ever seen a horse flatten its ears at the approach of other horses, constantly threatening to kick or acting scared when it gets close to another horse?
Often people think the horse is being aggressive and anti-social, which it is, but that’s not always because it’s a dominant horse.

Many horses display this behaviour because they are fearful of the proximity of other horses, and our usual reaction is to punish them for it.
Instead, we should be reassuring, acting as a leader for our horse, and trying to solve the problem at its roots.
That way, we can help the horse to become calm and more confident, particularly amongst other horses.

Unfortunately, many horses are kept in a far from an ideal environment, that is far from natural. It’s one of the issues with keeping horses in a domestic situation but it can be overcome to a large extent.

To start with, we tend to keep them in small areas, sometimes confined to stables and yards, rather than in the wide-open spaces and herd situation that nature provides for them.
When a horse is isolated from his own species, he can become perverse in his behavior when reunited with them.
For instance, young colts are almost always separated from the herd as they come up to yearling age when their behaviour gets precocious.

They then get a distorted opinion of themselves, especially when they can push people around too.
This results in injury when they are put back in a herd situation as they push the boundaries and get put back in their place.
If people separate horses “in case they injure each other”, they are more or less sentencing that horse to solitary confinement for the rest of their lives until their show/performance career is over.

Young horses especially need herd interaction to develop a comfortable relationship with other horses. Without that, they can be very fearful of the approach of another horse, which they show by threatening to bite or kick in order to clear their personal space.
This can be a real problem when you ride amongst others and is a danger to others that is your responsibility.
Sometimes it’s not enough to run a young horse with only its mother for company and discipline. Most mares are too easy on their offspring which is why some breeders have an old retired horse to be the ‘nanny’ for a group of youngsters. That way they have the best of both worlds – discipline and others to play with.

When Pat Parelli ran the first ‘Difficult Horse’ course at “Braidwood” for Level 4 students last year, the first thing they did was turn all the horses (about 30) into a huge pasture together for a week. This alone helped many horses on the road to becoming compliant creatures.

So, if you’re feeling guilty and want to do something about providing your horses with herd interaction, don’t just let them loose together unless its in a huge area (50+ acres) with no places a horse can corner another.
If you only have small areas, get the horses to respect electric fencing then divide the pasture in half or fence off a smaller section to place the new horse into until it’s accepted by the others over the fence.
Then, watch which horse seems to enjoy being nearest to the new one and put them together for a while before introducing them both back into the herd.
Of course, ensure that all areas that could trap a horse are fenced off and even round off corners as two horses may trap a less alpha animal.

To help your horse gain confidence when you are amongst others, play the seven games in an active way to keep their focus on you. By using some approach and retreat, you can get your horse to accept others in his/her personal zone.
When you’re riding be aware of your horse’s comfort zone and be prepared to move your horse in such a way that you are in control when another horse comes in your direction. Sideways and backwards or using an indirect rein to cause your horse to face another, is safer than turning tail.
Ask your friends to help you by setting up situations where you use approach and retreat and lots of friendly games with each other’s horses. This may take time and many repetitions but its worth the effort to have a brave and sociable partner.

If you’re not sure whether your horse is being fearful or just aggressive, seek the assistance of your instructor who can also help you plan the rehabilitation process.

Introducing my horse to a new herd.

“I’m about to move my horse to a different pasture, where other horses are agisted, and were curious if there are any particulars I should know about introducing him to the new herd? He’s in his own paddock at the moment but will be sharing his paddock with probably 10 or so other horses. Also, I’m just a little worried he may get herd bound, any advice or is it just a ‘need more savvy’ thing to overcome him wanting to be with the herd more than me. He’s very affectionate, loves company, very curious and playful and I don’t really want him to lose that towards me. I’m currently studying level I PNH-going really well.”

The Parelli.com website has an article written by Linda Parelli on Introducing Horses to a herd but basically, it’s best to first run your horse in a paddock or yard beside the herd and take notice of who he seems to like talking to or who hangs out with him. This horse would then be the best to put in the paddock with him as a buddy for a week or until they have formed a bond, and then introduce both horses into the herd in a large, safe paddock which means no tight areas where anyone can get cornered and where there’s good safe fencing and nothing they can hurt themselves on if they all go for a gallop.

Your horse will be better accepted with his buddy who was previously a herd member but be prepared for some hierarchy battles anyway. It’s safest if all the horses are un-shod so injury from kicks is minimized. If this isn’t possible, then dividing the paddock with electric tape and making the herd smaller by dividing it in half (keep obvious friends together and it usually works better to have mares and geldings separate) minimizes the risks of bullying.

When you release your horse into the herd, do it while they are well away from you otherwise, you risk being caught in the middle of the first introductions. Also, have another person or two on stand-by in case there is a problem with a dominant horse being too aggressive towards the newcomer who may need to be rescued and removed until he is accepted over the fence a bit longer.

As for becoming herd bound – yes, your level of savvy definitely helps your horse have confidence in you and your decision to leave the herd.
Keep in mind that the herd will be a comfort zone and your horse will be happier staying close to that comfort zone and gradually being asked to go further away in approach and retreat steps rather than expecting him to just cope with leaving.

If you take your horse out from the herd to feed him, then you and the feeding area will become a comfort zone that your horse won’t mind going to. Try not to be too demanding when you first start asking him to leave the herd, as he will then think that all you do is provide discomfort. With small, gradual steps, you will be able to keep his affectionate, curious and playful attitude towards you by making it fun and comfortable for him to be with you in more demanding situations like going for a trail ride.

This is a fantastic video – not just for donkey owners but all equine owners.
While donkeys NEED us to become savvier about our handling and management (just like zebras as I learned), our horses will benefit hugely if we take this same level of detail into account.
Ben Hart, an equine behavior specialist shares a step-by-step plan giving you the best chance of success when introducing equines to others. 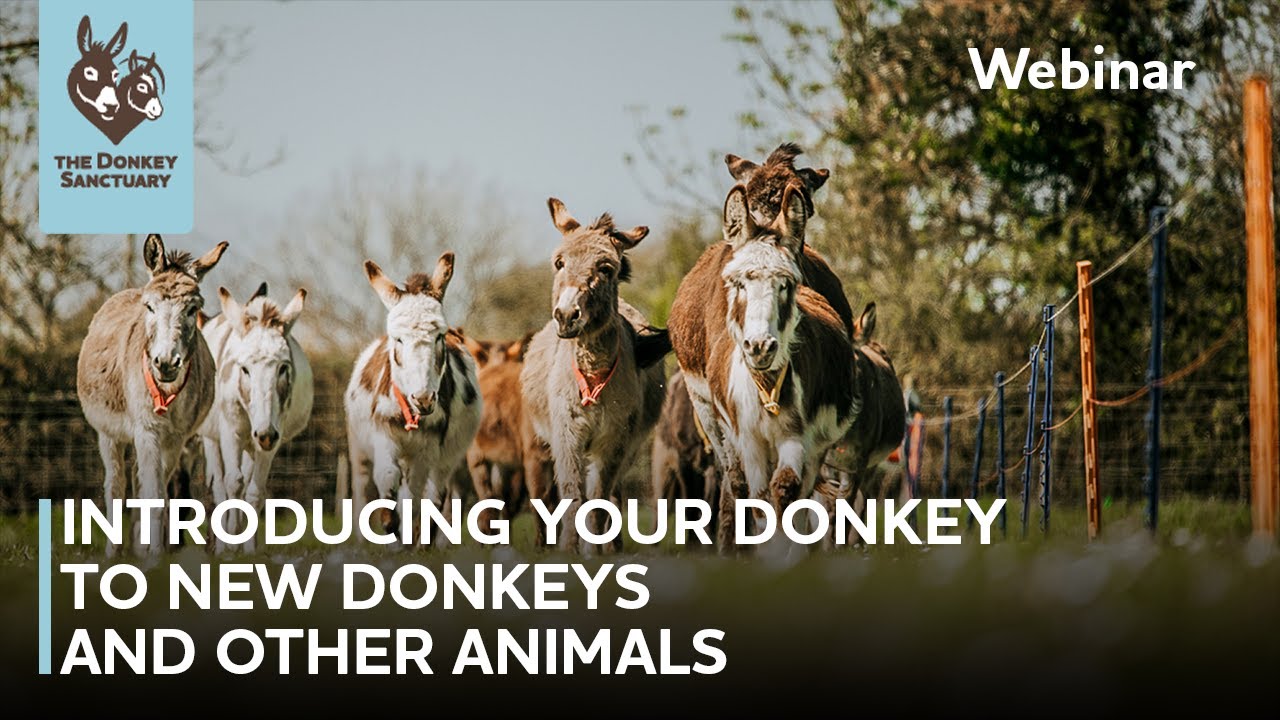 This site uses Akismet to reduce spam. Learn how your comment data is processed.

This website uses cookies to improve your experience while you navigate through the website. Out of these, the cookies that are categorized as necessary are stored on your browser as they are essential for the working of basic functionalities of the website. We also use third-party cookies that help us analyze and understand how you use this website. These cookies will be stored in your browser only with your consent. You also have the option to opt-out of these cookies. But opting out of some of these cookies may affect your browsing experience.
Necessary Always Enabled
Necessary cookies are absolutely essential for the website to function properly. These cookies ensure basic functionalities and security features of the website, anonymously.
Functional
Functional cookies help to perform certain functionalities like sharing the content of the website on social media platforms, collect feedbacks, and other third-party features.
Performance
Performance cookies are used to understand and analyze the key performance indexes of the website which helps in delivering a better user experience for the visitors.
Analytics
Analytical cookies are used to understand how visitors interact with the website. These cookies help provide information on metrics the number of visitors, bounce rate, traffic source, etc.
Advertisement
Advertisement cookies are used to provide visitors with relevant ads and marketing campaigns. These cookies track visitors across websites and collect information to provide customized ads.
Others
Other uncategorized cookies are those that are being analyzed and have not been classified into a category as yet.
SAVE & ACCEPT
Scroll to Top